From concept to detailed design

Do you have a clear idea of the solution that will take your production to the next level?

A solid engineering phase helps to convert the idea into a concrete realisation.

We divide the development from idea to machine into different phases. We sit down together in regular design reviews to work towards the best implementation.

With our many years of experience in mechanical engineering, electrical engineering, software and precision mechanics, we have everything in-house to deliver a complete 3D CAD design plus electronics and software.

We have developed in specific areas of expertise:

Our strength lies in complex automation issues where creativity and innovation are a must. Our clients are often positively surprised by the solutions we offer them.

We are proud of: 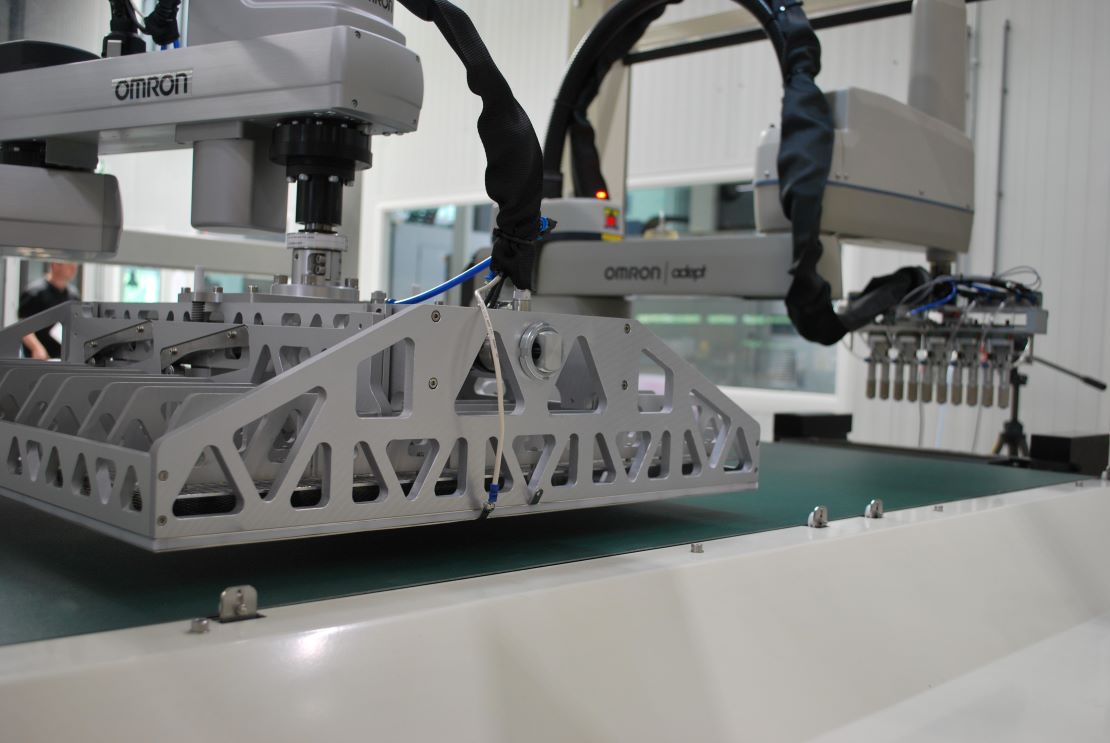 This two-fold scara robot set-up is designed for the punching and pick & placing of metal parts. The machine is integrated in an fully automatic production line.

The parts are supplied from the production line. Entering the machine, ten products are punched at once and moved to the conveyor belt by an Omron Adept robot. This robot uses a tenfold vacuum gripper with pitch translation for the task. In the meantime, each part is identified by a vision system by using a matrix code printed on each product. The matrix code is communicated to the network of the production line and retrieves information about the rejection/approval of each part. If a part is rejected, it is deposited during the transportation from punch to conveyor belt.

At the end of the short conveyor belt, 500 parts are simultaneously transferred tot the next production machine by the second Omron scara robot with a magnetic gripper.

There were two different scara robots used in this set-up. This decision was based on the requirements for each task. The first robot is faster and has a cycle time of 2,5 seconds. The second robot was chosen for its payload of 20 kg as it must carry 500 parts in addition to the robust magnetic gripper. 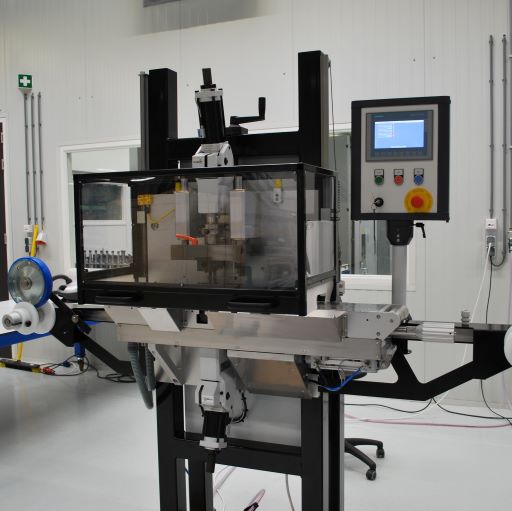 This machine is designed for fully automatic punching of rubber belts. The machine is easy to adjust to the width and pitch of the belt. Various punch blocks are included which can easily be exchanged for flexible use of the machine. After feeding the belt and setting the correct parameters on the HMI, the punching machine can punch fully automatically. By using mainly pneumatic valves, the maintenance requirement of the machine is low, which is ideal for the customer.

We have a detailed design, now what?

When the design has been approved by the parties involved, we move on to the next step. We are happy to help you in this. At STT Products, we have all the necessary knowledge, experience and resources in-house needed to realise the design.

What is your technical challenge?

Contact us
Copyright © 2022 STT Products All rights reserved.
Website developed by Convident
We use cookies on our website to provide you with the most relevant experience by remembering your preferences and repeat visits. By clicking "Accept all" you agree to the use of all cookies. However, you can visit "Cookie Settings" to give a checked permission.
SettingsAccept all
Manage consent

This website uses cookies to improve your experience while you navigate through the website. Out of these, the cookies that are categorized as necessary are stored on your browser as they are essential for the working of basic functionalities of the website. We also use third-party cookies that help us analyze and understand how you use this website. These cookies will be stored in your browser only with your consent. You also have the option to opt-out of these cookies. But opting out of some of these cookies may affect your browsing experience.
Necessary Always Enabled
Necessary cookies are absolutely necessary for the website to function properly. These cookies provide basic functionalities and security features of the website anonymously.
Functional
Functional cookies help perform certain functionalities, such as sharing website content on social media platforms, collecting feedback and other third-party functions.
Performance
Performance cookies are used to understand and analyze the main performance indices of the website, which help deliver a better user experience for the visitors.
Analyses
Analytical cookies are used to understand how visitors interact with the website. These cookies help provide information about statistics, number of visitors, bounce rate, traffic source, etc.
Advertisement
Advertising cookies are used to provide visitors with relevant advertisements and marketing campaigns. These cookies track visitors across different websites and collect information to provide customized advertisements.
Others
Other non-categorized cookies are those that are analyzed and have not yet been categorized.
SAVE & ACCEPT